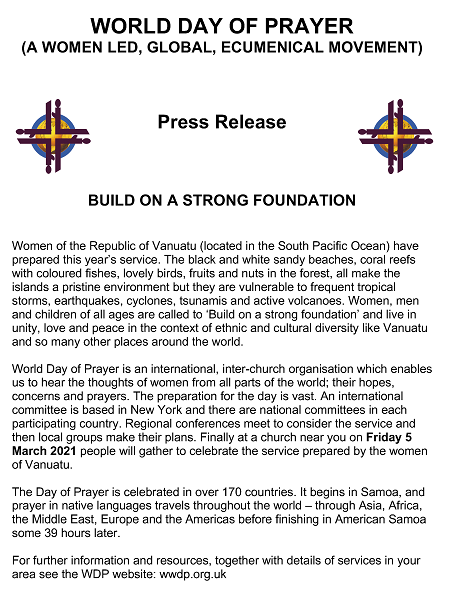 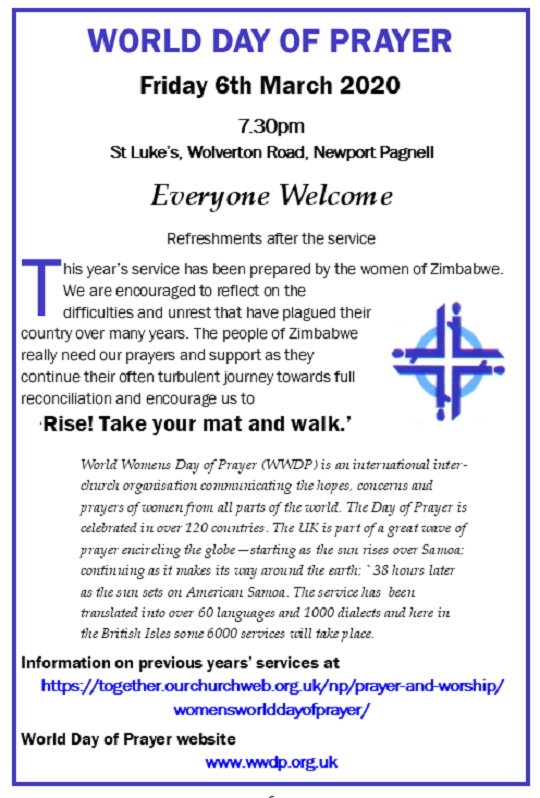 Previous years have been prepared by the women of Suriname, the Philippines, Cuba, Bahamas and Egypt.

Browse down, to find out more and also see the Womens World Day of Prayer website for more information.

The service in 2019, was cancelled because of bad weather 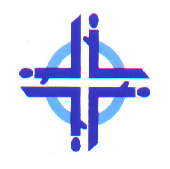 (men and women alike, and children too!)

The service was prepared by the women of Suriname.

All God's Creation is very Good!

Suriname is a beautiful country in South America, boasting wonderful forests and mountains and has great rivers with impressive rapids.It is a country rich with flowers and animals, and provides enough food for all.

In this year's service the women of Suriname urge us to cherish God's exquisite gift of Creation and to commit ourselves to caring for His world responsibly, so that we may pass it on, unspoiled, to future generations. We are too aware that we are destroying our planet; the scientific evidence for this is indisputable. This is the message from the women of Suriname and we must do all we can to halt this destruction.

As we pray with and for the people of Suriname we shall be part of a great wave of prayer encircling the globe—staring as the sun rises over Samoa, continuing as it makes its way around the earth, and ending some 36 hours later as the sun sets on American Samoa.

The service has been translated into over 60 languages and 1000 dialects and will be celebrated in 170 countries and islands. Here in the British Isles some 6000 services will take place.

The service in 2017 took place

The service this year was prepared by the Christian women of the Philippines.

Am I being unfair to you?'

reflects the focus of the service—St Mark's Gospel, chapter 20 verses 1-16.

The Philippines comprise three main islands in an archipelago of over 7,000 islands, namely Luzon, Visayas and Mindanao; located on the Pacific Ring of Fire close to the equator. This, along with climate change, contributes to the high incidence of typhoons and earthquakes, averaging 20 per year. Typhoon Haiyan, hitting the islands in November 2013 was the most severe storm recorded to hit land, claiming thousnads of lives and leaving millions homeless. Approximately 1,000 of the islands are populated by roughly 100 million (2014 estimate), and there are between 120 and 170 languages spoken. English and Philipino are the official languages. More than 80% of the population are Roman Catholic. Labour migration is a major economic force and has impacted the social fabric of the country. The country is one of the largest sources of migrant labour in the world, with 90% of the domestic workers women, working mainly in the Gulf countries.

Below this box there is a brief history of the Women's World Day of Prayer movement.

All are welcome to the service—women, children and men.

This day of prayer is held annually on the first Friday in March, when, over a period of 36 hours, an estimated 3 million people in over 170 countries take part; using an order of service translated into over 60 languages and 1000 dialects; in the British Isles alone, over 6000 services will have been held.

It begins on the international date line with the first service held at dawn in Tonga. Then, like a giant Mexican Wave, services take place all over the world, with the last service of the day on the island of American Samoa. The world is encircled in prayer.

Come and join us at St Bede's Catholic Church

for your local Day of Prayer service.

The origins of the Women's World Day of Prayer date back to the 19th Century starting in the US and Canada in spite of strong opposition from all-male mission boards. By 1887 women from different denominations were joining together in organizing days of prayer for missionary work, both at home and overseas, and word of these special days spread to the British Isles. The first service was held in England in 1932, closely followed by Wales in 1933, and Ireland two years later.

An international committee meets every four years to choose the themes and writers for the future years. Suggestions come from around the world, and the themes are allocated to countries that have expressed a desire to prepare an order of service. Countries are chosen to give as wide a geographical variation as possible. The process then moves to national committees, who may amend a suggestion slightly to suit their own country context.

The Women's World Day of Prayer is a unique organisation, truly interdenominational, truly international; it speaks the voices of women from all corners of the globe. Involvement in WWDP creates a netork of Christian women on a worldwide scale which also reaches into our local communities.

This service in 2016 was prepared by the Christian women of Cuba.

The focus of the service was the theme

reflecting St Mark's Gospel, chapter 10 verses 13-16, a reminder that
everyone is a child of God and equally worthy of love and respect.

The speaker was Mrs Mary Shepherdson.

The Republic of Cuba is the largest Caribbean island, located at the entrance of the Gulf of Mexico and called 'the Key to the Gulf'. Politically at odds with the USA, Cuba suffered greatly due to the economic embargo imposed upon it in 1960 but has found strength within itself to move on and overcome many of its problems

The service in 2015 was held in the Baptist Church, Lovat Hall, on Friday, 6thMarch. The service had been prepared by the Christian women of Bahamas. The focus of prayer was

and these problems despite the Bahamas being one of the most prosperous countries in the West Indies.

The service in 2014 was held in the United Reformed Church on Friday, 7thMarch and the speaker was the Revd Coralie Mansfield. The service had been prepared by the women of Egypt and was called ‘Streams in the Desert'. 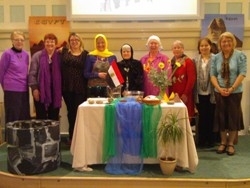 The Day of Prayer starts at dawn in the Pacific and moves in a wave around the world ending in the USA at nightfall. This is always a moving and uplifting service and this year's was no exception. People from every church in the town took part - and not just women. Thanks to Eva for organising it!