Churches Together in Newport Pagnell

Browse down this page for the following sections

There are many different Christian churches in Newport Pagnell, but they all have the same basic calling—to worship God, to share the good news about Jesus Christ and to work for the good of all.

When the wider community of Christians in Newport Pagnell come together to do things, they're called ChurchesTogetherNP (CTNP). 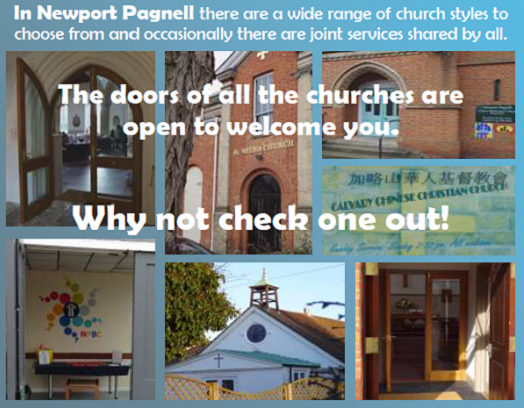 ChurchesTogetherNP events and joint services are open to everyone. Examples are

For links to these activities, have a look in the ACTIVITIES tab, for example at CTNP activities

For other ways into this website, and for related links, try 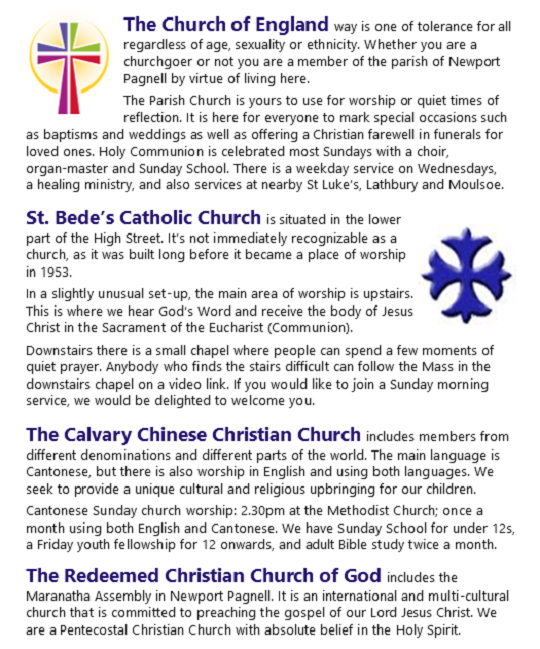 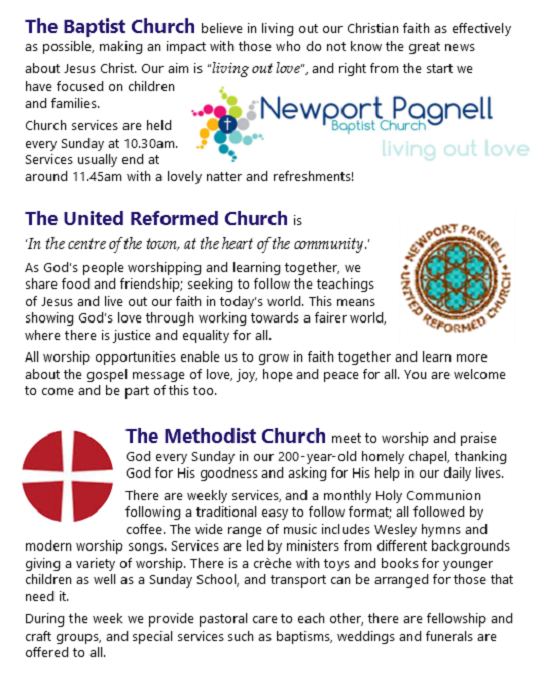 In addition, Care Homes with close links to one of the Newport Pagnell churches include Westbury Grange. At Westbury Grange people with either nursing need or dementia are cared for. The chaplain, when appointed, spends time getting to know everyone, finding out what's important and providing support. 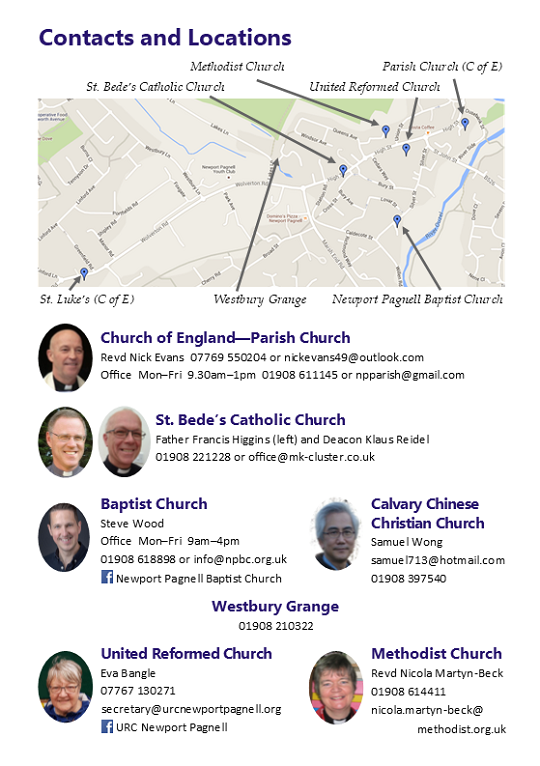 To find the location for a particular church, have a look at Find a church or go to one of the following church websites.

The churches of Newport Pagnell are

To find out more about the structure and organization of CTNP, Have a look at CTNP Constitution in the section "meetings & administration".

The churches of Newport Pagnell are working together in the service of God to proclaim the Gospel of Christ in the community. The churches join together for worship and for social activities, learning from each other and working towards true unity in Christ.

NEWPORT PAGNELL has a long and varied history as one of the chief communities of North East Buckinghamshire.

People have lived at the confluence of the rivers Great Ouse and Lovat since the Bronze Age. The Saxons, the Romans and the Normans all had an influence on the development of what was to become one of the first market towns in the county.

Newport means new market; the Pagnell comes from the Pagnell family who owned the Manor in the 12th century. It once had a castle and a priory, but though agriculture was its main industry for centuries travellers soon brought it an added importance. The town became a busy stopping place for travellers between Nottingham and London, Oxford and Cambridge. During the Civil War it was heavily fortified by the Parliamentary Forces, whose ranks included a soldier who was later to earn fame as John Bunyan, the author of Pilgrim's Progress.

Samuel Pepys the diarist visited the town and praised the Parish Church as being "Cathedral-like." During the coaching era many other famous people stayed at the hotels including the Swan, the Saracen's Head and the Anchor.

Newport Pagnell at this time had its own tanneries, parchment works (one by the River Lovat is now the last remaining in Britain), breweries, cattle market and was an important centre for the lace trade.

In the 19th century it had its own canal, its own railway link with the main line at Wolverton, its own newspapers and a mustard factory. Tickford Bridge was built over the Lovat in 1810 and is still in use, being the oldest iron bridge in England still taking main road traffic.